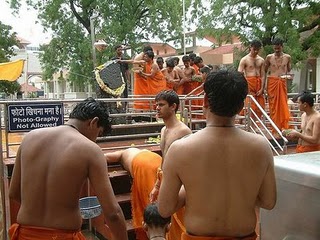 In Shani-Shingnapur, everyday, a lot of devotees come for a Darshan of God Shani Dev from all over India & other country. On every Saturday, countless devotees come and take advantage from the Darshan. The most important festival in Shani Shingnapur is Aashadi Ekadashi, Gudi Padava, Shani Jayanti, Shani Amavasya etc.


Gudi Padava - special festival in Shani Shingnapur :
In Maharastra, Gudi Padava is celebrated as the New Year day by Maharashtrians. Another name of Gudi Padava is ‘Chaitra Shukla Pratipada’. Gudi Padava is celebrated on the first day of the Chaitra month of the Indian Calendar. So, devotees seeking relief from their woes, seek to take the ‘Darshan’ of God Shani Dev on this day. This festival is celebrated In Shani Shingnapur village also.
The ‘Ganga Jal’ (holy water) is brought by the devotees of the Shingnapur village in pots on bare foot. At least one person from every household participates in this festival. After bringing the Ganga Jal, the devotees stop outside the village. Next morning, they collect grain & with the flag and chanting the devotees are brought into the village. Then God Shani is bathed in the ‘Ganga Jal’. While bathing no body is allowed to step on the temple. After this, those seeking vows present the prasad to other devotees.


Shani Jayanti - Birth day of God Shanidev :
Shani Jayanti is considered as the birth day of God Shanidev. This day comes on Vaishak Vadya Chaturdasi Amavasya (In May Month). In Shani Shingnapur, Shri Shaneshchar Jayanti is celebrated with great gusto and devotion. On this Great occasion, the god appears blue in colour and seven days of ‘bhajan- pravachan’ and ‘kirtan’ and Five days of ‘yagya (homa)’ are also held in the sweltering heat of May. On this day, The “Laghurudraabhishekh” is performed by resident priest (pandit). This abhishekh goes on for 12 hours. With the ‘Maha Puja’, the function comes to an end.
In the beginning of day, the deity is cleaned with Panchamrut, Gangajal, oil and water from the wells near by the deity. After the bath, the ‘Nauratnahaar’ is placed on the idol.
On this day, Shani yagya is conducted by those people who have the Saturn/Shani cycle or Sade sathi in their horoscope. Many believe that Saturn cycle can be a reason for the bad patch in their life and also say that worshipping Shani on Shani jayanti rids one of all troubles and suffering.


Shani Amavasya - Auspicious Day of the God Shanidev :
Generally, the devotees can perform pooja and abhishek on any day at any time in Shani Shingnapur. But the Shani Amavasya which falls on a Saturday is considered to be most auspicious. On this day, a lot of devotees from all over the country come to receive blessings of God Shani Dev. In Shani Shingnapur, Lodging and boarding arrangement of devotees are available on this day.
In a whole year, there will be minimum two or maximum three Shani Amavasya. On this great occasion of Shani Amavasya, there will be arrangements for the festival in Shani Shingnapur. From the mid- night of the Friday to the mid-night of the Saturday, prayers, offerings and abhishek of shanidev will be held. In the Shani temple, a ‘Mahapuja’ will be held. In this day, nearly 8 to 10 lakh people come within 24 hours. This Shani Amavasya is known to give good result to all religions.