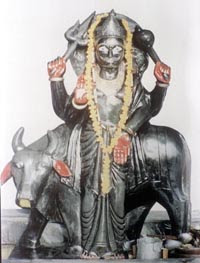 “Kokilavan Dham” is the famous temple of Shanidev. This temple is situated at Kosi Kalan, near Mathura in Uttar Pradesh (India). It is believed that Kokilavan Dham is the place where Lord Shri Krishna gave darshan to Shani Dev. This temple is visited by many devotees on Saturday. There is an interesting story about Shani Dev and God Krishna.
When God Krishna was born all god visited to Nandgaon. God Shani was also one of them. Everyone was allowed to take Darshan of God Krishna but not Shanidev. When Shani dev was going to take Darshan of Krishna then Yashoda stopped him at the door and said,” You can’t see my baby because your name is fearful. If my baby sees you, he will be frightened.”
Hearing this Word of Yashoda, Shani Dev felt disappointed and went to nearby forest and started penance. After a short time God Krishna appeared before him in the forest and asked him, “What is the problem. Why you are in forest?” Shani dev replied, “O God! Please tell me one thing, when I am doing my duty to punish people according to their work (Karma). Then why people think about me that I am malignant and cruel. Why people think that Shani dev creates trouble only. Why do they avoid even my shadow? Today also when all god could enjoy the bliss of your Darshan, I am denied that right and benediction."
God Krishna advised Shanidev to stay put near Nandanvan. He also granted him the boon that whoever came to his temple to pray would immediately be freed from all worries and afflictions.
At last, God Krishna visited the temple and began playing the divine flute. Hearing the sound of flute, the Gopis arrived but Krishna turned himself in the form of a Cuckoo (Koyal in Hindi).
That place of the forest where Krishna appeared before Shanidev, has since been called “Kokilavan”. Now it is famous for “Kokilavan Shanidham”
.
Posted by Unknown at 1:22 AM